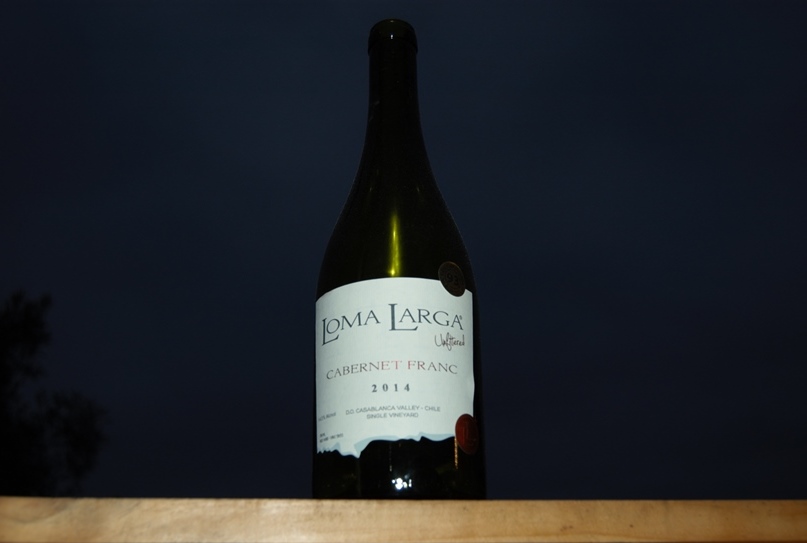 Looking for a wine with some oomph for the weekend? Well, here’s one I can wholeheartedly recommend: Loma Larga Cabernet Franc 2014.  I must confess that Cabernet Franc has become one of my favourite varieties of late. It may be more subtle than its flashy offspring Cabernet Sauvignon but it’s beautifully aromatic and quite versatile.

A while back I featured two Cabernet Franc wines from the Loire and tasted them alongside Loma Larga’s other brand, Lomas del Valle Cabernet Franc 2014, which had been made in the Loire style.  They were light-coloured and delicate with aromas of red fruit. The wine we’re looking at today is made by the same producer from the same grape in the same year but in a whole different style.

I enjoyed this wine with pan-fried fillet of lamb with boiled potatoes, tomato salsa and avocadoes. Alejandra at Loma Larga also suggests pairing it with magret duck breast, fettucini with a pork- or game-based sauce, tomato-based dishes or cheese such as Brie, Gorgonzola, Gruyère, Camembert, Manchego and  Cougar Gold.

Loma Larga Cabernet Franc is a deep ruby-coloured wine with a pronounced complex nose with layers of aromas. Wine bores like me could easily spend five or more minutes sniffing it to try to separate out and name all those different notes.  The first notes are what’s known as “pyrazines”, such as green chilli pepper, tomato leaf and blackcurrant leaf. Next are the aromas of ripe black fruit: blueberries and blackcurrants. Then some lush oak-influenced notes of chocolate, coffee and coconut.

In the mouth, the wine is dry and full-bodied with high acidity and pronounced, velvety smooth tannins. At 14.5%, the alcohol level is high and the flavour intensity is also high with nice concentration. The mouth is very fresh and packed with juicy black fruit. This is a complex and delicious wine which has plenty of scope for evolving further over time. It’s also unfiltered, so worth decanting before serving.

Why is this wine so different to the Lomas del Valle Cabernet Franc? Mainly because of how the wine was made. The winemaker wanted to draw out lots of colour and tannins, so the destemmed grapes underwent a cold soak (maceration) for five days before fermentation, then pump-overs and a rack and return during fermentation and then a further maceration for ten days after the fermentation. Keeping the juice with the skins for such a long time makes for a much darker-coloured wine with more tannins and the pumping over also helps this process.

Then the body was made smoother and rounder and some additional aromas and flavours were added by the wine being aged in French oak barrels for 20 months. 60% of these barrels were new, which means they will have given the wine some aromas like vanilla, toast and cinnamon, while the other 40% were barrels being used for the second time, so they will have less impact on the aromas but contribute to the mouthfeel.

Where can you buy Loma Larga Cabernet Franc?

Here in Chile, Loma Larga wines are on sale at Jumbo and in specialist wine stores like Everwines.

If you live in the US or Europe and would like to find out about direct sales, you can email Alejandra at agutierrez@lomalarga.cl for more information. Reference price USD24