If  you follow the Douro River downstream, eventually it passes between the twin cities of Porto and Vila Nova de Gaia and reaches the Atlantic Ocean. And it is to Vila Nova de Gaia that Port has traditionally been brought to mature.

If you look across the river at the city, you’ll see that it is peppered with signs bearing the names of famous Port companies, like Graham’s, Dow’s, Offley and Sandeman. These are the shippers’ lodges; cool, dark cellars filled with vats of ageing Port. The lodges often also serve as the shipping companies’ headquarters. There is a good reason for the cellars being here, rather than upriver. Situated by the sea, Vila Nova de Gaia gets the full force of the moist winds blowing off the Atlantic. And it is the moderate coastal temperatures and humidity that make it so perfect for the long, slow process of maturing Port.

There are lots of port lodges you can visit in the city. Sadly I only had time to visit one and I opted for Sandeman’s because of its interesting history and because they are one of the few lodges to offer premium tastings, so I was able to taste four Tawnies of different ages, a real privilege.

Sandeman’s lodge is one of those places that is much bigger on the inside than its front façade suggests. After a quick tour of the small museum, we entered the dark, cool and cavernous storeroom, which seemed to go on forever and was lined with great wooden vats and casks of different sizes, generally of old, neutral oak.

This is the place where the magic happens to the young, recently fortified wines that arrive each spring from the Douro region.

Depending on the type of Port being made, the fortified wine is stored in large wooden vats or smaller wooden casks for a period of between three and five years, although some are matured for much longer. They are also blends of wines of different ages. For instance the 10-year-old Aged Tawny I tried contained wines of between 9 and 12 years of age, while the 40-year old was a blend of wines of between 30 and 55 years of age.

Tawny Port is so named because of its brown colouring (the older it is, the browner it gets), which comes about because of contact with oxygen. With most types of wine, the winemaker tries to limit the wine’s contact with oxygen, precisely because it makes wine go brown (just like a cut apple exposed to air) and it can make the wine’s fruity aromas and flavours fade away. Too much oxygen contact for a regular wine can also cause the development of unpleasant smells because of bacteria.

However, the higher alcohol level of fortified wines stops such bacteria from developing and, in the case of certain fortified wines, the winemaker’s goal is the exact opposite. He/she wants to achieve this brown colour and the amazing Christmas pudding aromas and flavours that come as a result of years of ageing with oxygen. So, for the Port wines that are to become tawnies, a space is left at the top of the wooden casks so that the oxygen can gradually work its magic.

Over the years, the port wines are racked off their sediment and put into clean casks or vats and most Ports are clarified and filtered prior to bottling. With only a few exceptions, such as vintage and unfiltered Late Bottled Vintage, most Ports are ready to drink when bottled and are best enjoyed right away rather than stored away. 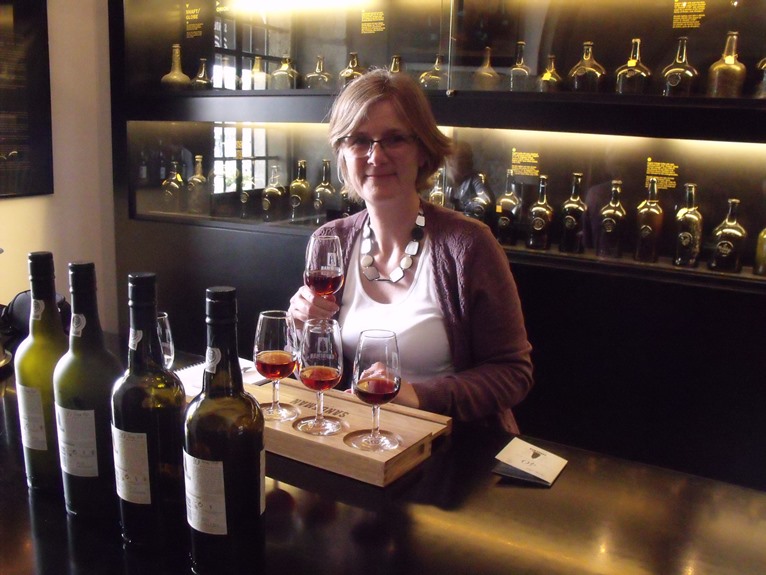 Deep ruby colour with orange hues and a pronounced nose of jammy red fruit, like cherries, raspberries and plums, together with notes of prunes, figs and sultanas from the contact with oxygen. This Tawny was beginning to evolve complex aromas of chocolate, liquorice, vanilla and walnuts. In the mouth, the sweetness was nicely balanced by the acidity, the tannins were smooth and tooth-coating and the full body was rich with red fruit, a whole array of dried fruit and chocolate flavours. Delicious.

Medium amber colour with tawny hues. This wine no longer had those jammy fruit aromas and instead the pronounced nose featured a delicious mixture of chocolate, dried fruit such as figs, prunes, sultanas and walnuts, together with sweet spices (vanilla, cloves and nutmeg) and hints of toffee and caramel. In the mouth, the sweet, rich body was balanced by high acidity and medium, smooth tannins. The flavours resembled a Christmas pudding with a little chocolate thrown in for good measure. Long, pleasurable finish.

Medium tawny colour with olive brown hues. The first note on the nose was alcohol, followed by the full range of nuts, especially walnuts and Brazil nuts, together with dried fruit, like sultanas and figs, honey and vanilla. This too was a sweet, full-bodied wine with high acidity giving it the necessary balance. In the mouth, walnuts, almonds, alcohol-soaked prunes and sultanas and figs.

Deep tawny in colour with brown hues. Again the nose first revealed alcohol, followed by Brazil nuts, almonds and walnuts, then a layer of sultanas, figs, vanilla and honey. Like the 30-year old, this Port was big, full-bodied, with well-integrated tannins and high acidity. Flavours of walnuts, Brazil nuts, figs, sultanas, prunes, honey and vanilla.

The Douro – the birthplace of Port wine covering how and where Port is made.