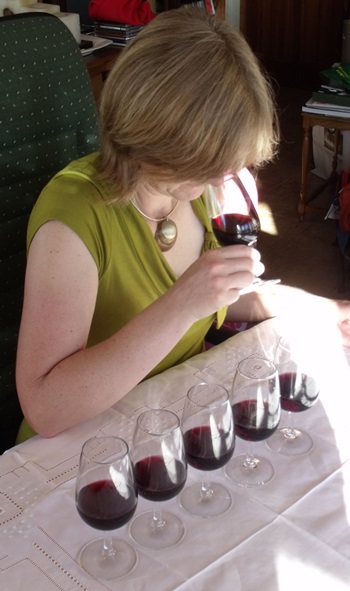 So what has the start of 2017 been like for you? For me it’s been pretty full-on, with round-the-clock translation projects, dog health crises and several intensive weeks studying French wine. All against a backdrop of anxiety about world events; we’re certainly living in interesting times. Well, whatever happens, it’s good to know we can always fall back on the simple pleasure of a delicious meal in good company accompanied by a great wine.

I’ve been tasting French wines these last few weeks and it’s been quite a revelation! Like many people I know, my palate has been honed on New World wines, which tend to be big and bright and display all their assets up front. Of course I know there are exceptions, but generally speaking you know exactly where you are with a Chilean Cabernet Sauvignon or Sauvignon Blanc wine, for instance, and can identify it by its aroma at 10 paces.

Well a lot of these French wines are far more subtle and it takes some adjustment to get used to them. Chic and mysterious, they start changing after you open the bottle and keep you guessing all the way to the last drop, kind of like the dance of the seven veils. They change while they’re in the bottle too, often getting better years or even decades after they were made.

So I’d like to share a few of my French wine discoveries with you over the next few posts, starting with three wines from Bordeaux and South West France.

This first wine was from Bordeaux, from one of the satellite areas near Saint-Émilion, an area famous for red blends made from Merlot with Cabernet Franc or Cabernet Sauvignon.

This wine evolved substantially in the two hours between opening and finishing it. The most immediate sensation was of a very pleasant sweet bouquet of sweet spices (vanilla, cinnamon, nutmeg) and sweet ripe fruit, like black cherries, plums, raspberries and cassis. As it opened, some subtle notes of tobacco and leather began to appear. By the end, the nose had become quite herbal and complex and much less sweet, with notes of liquorice, rosehip and prunes.

A dry, full-bodied, well-balanced wine with high levels of grippy tannins, high acidity and a long finish. Delicious in the mouth, with a cigarbox texture and lots of concentrated black and red fruit, like black cherries, black plums, raspberries, spices such as vanilla and that more austere herbal tone that was slow to emerge on the nose, reminiscent of liquorice and rosehips.

The second French wine was from Madiran, in South West France, one of the few places in the world other than Uruguay that are renowned for making wines with the tough, high-tannin Tannat grape.

Dark-coloured and intense nose with three layers of aromas: the first and most prominent were the herbal notes, like aniseed and liquorice, perhaps a hint of fennel, followed by ripe black fruit, especially blueberries and blackberries, with a hint of cranberries. Then finally there was just a subtle hint of vanilla from the oak-ageing, which became more apparent as the wine opened up.

This was a dry, medium-bodied wine with high levels of tooth-coating tannins, high, very fresh acidity, high alcohol and a long finish. In the mouth it had that cigarbox texture typical of wines with high levels of prominent tannins and concentrated herbal notes, like liquorice, fennel and aniseed, ripe black fruit flavours, such as blueberries and blackberries and that subtle hint of vanilla.

The third French wine is also from South West France, from the region of Jurançon, which is known for its white wines, both sweet and dry, made mostly with the dark-coloured Gros Manseng and Petit Manseng grapes. This wine is so sweet because the grapes were left hanging on the vine until very late in the season, by which time they were shrivelled (raisined), a process which concentrates their flavours, sugars and acidity.

This was a lovely sweet, golden-coloured wine. The nose was pronounced, complex and concentrated with a wide variety of different aromas, most particularly of exotic and tropical fruit, such as bananas, cherimoya, mango, passionfruit, pink grapefruit, together with dried apricots and apples, as well as some floral notes (orange blossom). There were also some honey aromas, with hints of marmalade and a touch of spice (ginger) from the bottle-ageing.

The sweetness of this full-bodied wine was beautifully offset by its high acidity, making it fresh and stopping it from being cloyingly sweet. In the mouth it showed a delicious range of exotic and tropical fruit, such as tinned pineapple, grapefruit, bananas, mango and passionfruit, as well as candied apricots and apples, a floral hint of orange blossom, some honeyed notes and a touch of ginger.

For information about other French wines, check out these posts:

Have you tried a great wine lately? If so, I’d love to hear about it.