It’s often said that it’s your second or even your third business that is the winner; the one that you get right, because you can apply all you’ve learned along the way. So when Stolichnaya vodka owners SPI Group bought the renowned Mendoza winery Achával-Ferrer, the question was what were the men who had founded and built this winery going to do next? Two of them, Santiago Achával, who also owns a small winery in California, and Italian-born Roberto Cipresso, who has a number of ventures in his home country, decided to invest all that experience in starting up a new winery together: Matervini. And they chose to locate it within spitting distance of their former venture in Luján de Cuyo. But they didn’t just set out to replicate their former business; instead they took three very significant strategic decisions.

The first was to make the new winery as environmentally-friendly as possible. Matervini is self-sufficient in hot water from photovoltaic panels and in solar electricity – in fact it even injects electricity into the national grid. The winery recycles its grey water for irrigating the gardens and also composts its organic waste, taking care to get a good mix that can enrich the soil. They use intervine planting during winter – grass where they want to reduce vine vigour or barley or rye where they want to add nutrients to the soil. These crops are ploughed back into the soil around the time the vines begin to flower.

Meanwhile, some thought has gone into the winery building design. Close to the building are wire panels, which in spring and summer are covered with deciduous or annual climbing plants to give shade, reducing the need for air conditioning. In autumn, the leaves fall or the annual plants die back, leaving the panels bare and revealing the murals on the walls behind. The weaker sunshine of autumn and winter reaches the building, helping raise temperatures inside.

The second decision was to take a business model that is far more common in the United States than in South America: the wine club. Instead of looking to market their wines to retailers or through distributors, Matervini sells them directly to the public, offering worldwide shipping and deals for members. The winery – like Kingston Family Vineyards in Chile’s Casablanca Valley – ships wine to its base in the United States, facilitating onward shipment to its base of customers there. 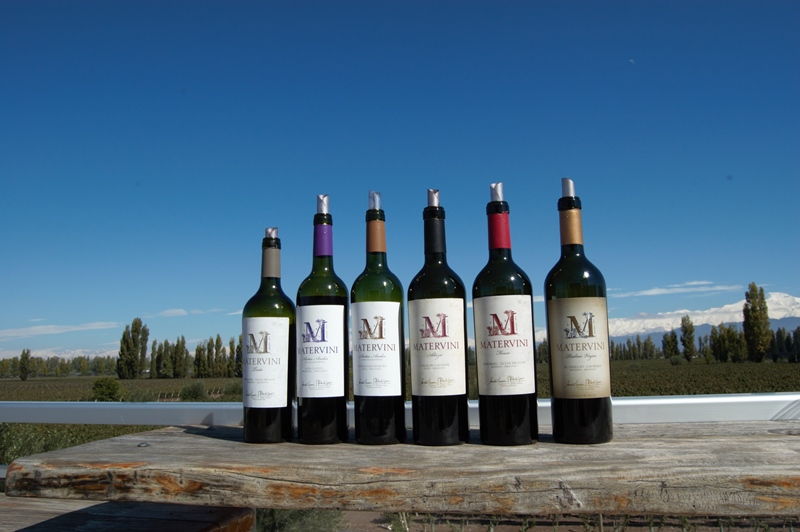 The third decision was to make Matervini a Malbec project. We had the good fortune to taste the wines with Santiago himself and hear first-hand how each was made. Exuding calm self-confidence and genial good humour, he told us that Matervini’s strategy is to make great Malbec wines, each one unique because it expresses the place it comes from.

“I get tired of journalists asking me the same question: ‘What’s next after Malbec?’ I always reply ‘More Malbec!’

His argument, teemed with the wines we tasted, was pretty compelling. We tasted 6 different Matervini Malbec wines, all but one from 2014. Each had been made in the same way and, according to Santiago, the only differentiating factor was that each was from a different place. And he was right, as you can see from the tasting notes below, each of them was quite different. 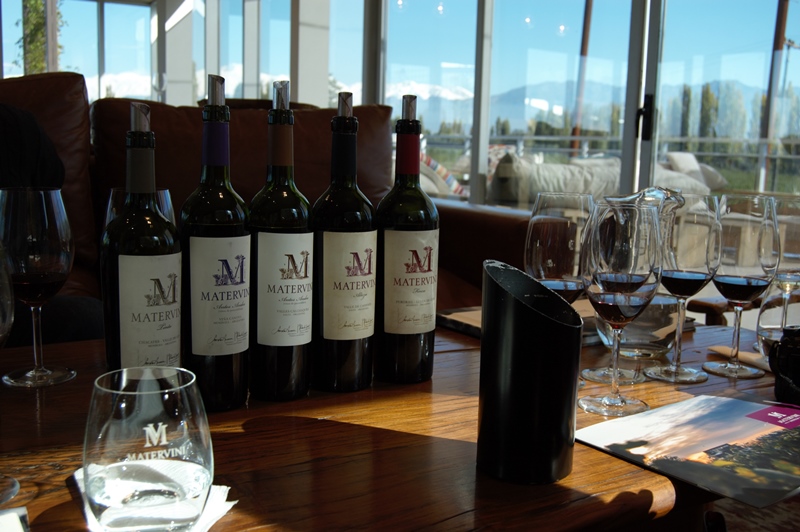 Santiago became especially enthusiastic when talking about planting in the Precordillera area, a mountain chain parallel to but lower than the Andes. He explained that this is especially interesting because of the benefits of growing at altitude and also because the soils come predominantly from one type of stone rather than being a broad mix of different types of rock. He feels this gives each wine a greater chance of expressing its origin.

His latest project has been to plant three plots totalling 20 hectares in the Precordillera. One has east-facing slopes of fractured basalt with 2mm of limestone on top and the first wines have been produced from these vines. The other two plots, which are not yet producing wine, are an east-west-facing hillside with friable limestone that is 40-50 million years old in thin vertical layers with oxidation on one side oxidising; and a north-facing slope of hard grey limestone encrusted with silica magnesium from the deep seabed 450 million years ago, when the continents were still joined up.

“I believe that the wines from these plots are going to be the ones that really make the winery,” he concluded. He may well be right.

This wine comes from a high altitude area of the Uco Valley in Mendoza.

This wine was medium ruby in colour with a pleasant nose of fresh black plums and floral notes. The wine was dry and well-balanced with medium levels of tannins, body, acidity and alcohol and a medium finish.  Very pleasant.

This wine comes from Las Heras, the foot of Villavicencio in the Pre-cordillera,

This wine had a particularly floral nose, very pleasant. The tannins were finer and better integrated than in the Tinto from Chacayes. The wine had fresh acidity, some mineral notes in the mouth and medium body. A very elegant style of Malbec.

This is another wine from the Pre-cordillera range, beetween Cafayate and Molinos in Salta in northern Argentina.  The vines are planted at an altitude of 2400 metres.

The nose of this wine was different again, with forest floor and mineral notes. The wine had more body and acidity and chewy tannins. Lots of fresh fruit flavours in the mouth and a long finish.

This wine is also from the Pre-cordillera area in northern Argentina at a place called Yacochuya in the Cafayate area of Salta. The vineyards is planted at 2200 metres above sea level and so, as is the case with Calchaquíes, the cooler temperatures at altitude compensate for the northerly latitude, which might otherwise make the climate too warm for producing quality wines.

There is an unusual aspect to the winemaking for Alteza. In a bid to control the spread of pests and diseases, there are strict controls over moving fruit from one province to another in Argentina and so it is not possible to transport grapes from Salta to Mendoza. However, Matervini doesn’t have winemaking facilities in Salta, so they needed to find a way around the problem. The solution they came up with is novel. It is fine for the winery to transport grape must. So, the grapes are put into small, 1000-litre stainless steel tanks, which are put into a refrigerated truck and transported at a low temperature. And the driver and winemaker make the journey slowly from Salta, stopping every three hours to manually punch down the cap of grape skins that have floated to the top of each tank. This is a novel type of cold soak, allowing the colour and tannins to seep from the skins into the must prior to fermentation at the winery.

This wine was deeper in colour. The nose was more subtle but particularly floral with notes of violets, as well as the characteristic black plum aromas of Malbec. This was a bigger wine, with more body and higher acidity than the previous examples. The tannins were medium and fine. Pleasant plum fruit and mineral flavours and a fairly long finish.

This wine comes from the Perdriel área of Luján de Cuyo in Mendoza where the winery is based. It is made from grapes from very old vines (80 or more years), sometimes with a small batch of wine from newer vines blended in.

This wine was medium ruby in colour. A fairly pronounced nose featuring notes from the oak ageing, like vanilla and cinnamon, as well as black plums. This medium-bodied wine had medium acidity and medium, velvety tannins. It featured black and red fruit and some spicy flavours from the oak.

Very limited edition – 200 bottles produced. This wine was made from grapes in Matervini’s new Precordillera plot.

A beautiful wine with a mineral nose teemed with the biscuity, toasty notes from the barrel-ageing. In the mouth, it was medium-bodied, with fresh acidity, tooth-coating tannins and a long finish.

Musing on Mendoza, Malbec and age

The lowdown on the Mendoza wine region

The rich fruitiness of Malbec wine