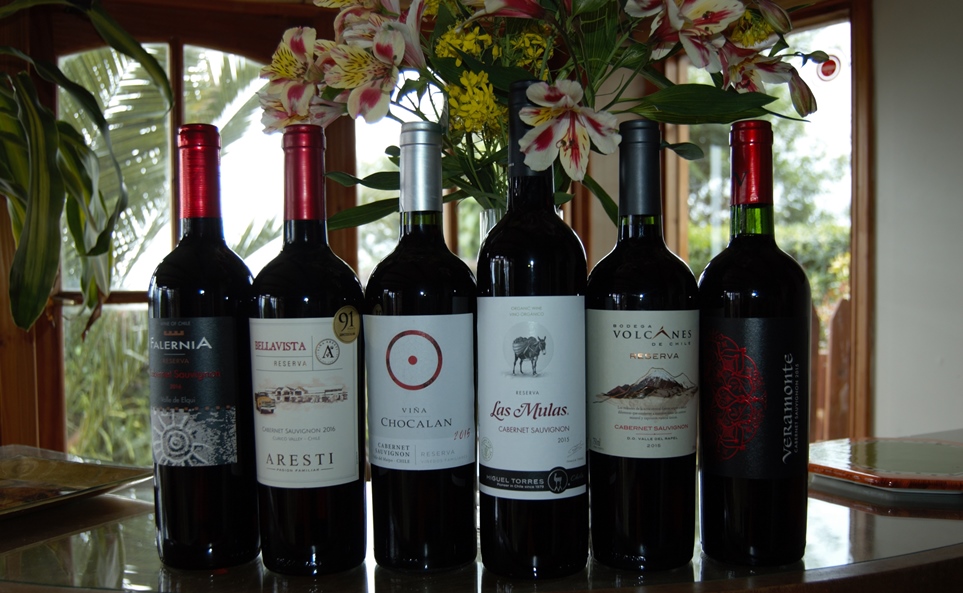 For anyone looking for a good-value red wine to raise a glass or two to celebrate Chile’s Independence Day on 18 September, here are some suggestions. For this tasting, we deliberately selected BBB Chilean Cabernet Sauvignon wines. (BBB is a much-loved Chilean term denoting “bueno, bonito y barato” – good, attractive and cheap).  All six wines in our tasting are Reserva wines that are widely available in the supermarkets and retail at between 4,000 and 6,000 Chilean pesos.

Cabernet Sauvignon wine is a firm favourite during the five-day meatfest known in Chile as Fiestas Patrias, when people throw caution to the winds and, in the name of commemorating the country’s  independence, stuff themselves with choripanes (sausage sandwiches), empanadas (savoury pasties, often filled with meat), barbecued beef and other treats, often washed down by lashings and lashings of their preferred tipple.

Why does Chile have so much Cabernet Sauvignon?

Cabernet Sauvignon ripens well in Chile, producing wines with noticeable tannins, medium to full body and black fruit aromas and flavours, especially blackcurrants. Consumers around the world like the firm-structured, fruity style of Cabernet Sauvignon Chile produces, so it is able to export it in enormous quantities. So you can find BBB Chilean Cabernet Sauvignon wines (as well as some more premium ones) in wine stores, supermarkets or other outlets from countries as wide-ranging as China, Singapore and South Korea, the US and Canada, Sweden, Germany and the Netherlands.

Many thanks to our international tasting team, who heroically blind tasted both sausages and wines for our tasting, scoring each one according to preference. The ranking below reflects the overall score by the team.

This is an organic wine made from 100% Cabenet Sauvignon grapes. It was aged for 6 months in French oak.

This wine is a deeper colour with a fruity nose. It’s another easy-drinking wine, nothing complex but nice and fruity.

This wine from northern Chile was made from 100% Cabernet Sauvignon grapes. 40% of the wine was aged in oak and the rest in stainless steel.

Easy-to-quaff red with some fruity aromas.

This wine was made from 85% Cabernet Sauvignon and 15% Syrah grapes and was aged in oak for 8-9 months.

A dry, fruity wine with a mineral hint. An uncomplicated quaffable red.

This wine was made from 90% Cabernet Sauvignon, 5% Merlot and 5% Syrah, 40% of the wine was aged in used oak barrels for 6 months.

Interesting red fruit nose and the mouth is nice and fruity too. Another easy-drinker.

This wine was made from 100% Cabernet Sauvignon grapes and the wine was aged in neutral oak barrels for 8 months.

Pale-coloured with a medium, fruity nose. A bitter note on the palate and some red fruit like cranberries.

How Cabernet Sauvignon wine is made