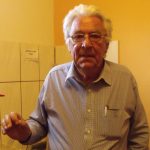 I recently read an article by a woman who argued that starting a business beyond the age of 40 is just too tiring and risky. I was thinking about that as I met Chilean organic sparkling wine producer Daniel Raab, who has bucketloads of entrepreneurial spark despite being a silver-haired grandfather. Let’s face it: whatever your business or profession, it’s not your age that defines you, but rather your attitude.

“Age is an issue of mind over matter. If you don’t mind, it doesn’t matter.” Mark Twain

Daniel Raab is the owner of Domaine Raab Ramsay, a boutique organic vineyard nestling in Chile’s Marga Marga valley, an area you’ll struggle to find on any viticultural map. It seems that this valley was once dotted with small vineyards but almost all are gone now, under the pressure of water scarcity and real estate growth. Indeed modern housing now flanks the estate.

He makes sparkling wines and cider using in-bottle fermentation, with relatively long ageing using the traditional pupitre system and his own special remouage technique to stir up the lees and add complexity to the wine.

He is always innovating in his cellar, for instance trying out new ways of cooling the must to slow down the fermentation process. He has also been experimenting with using must instead of the traditional water, sugar and yeast syrup known as liqueur de tirage. And, following disgorgement, he uses sparkling wine from the same batch to top up the bottles, rather than the sugar syrup called liqueur de dosage. If you consider that the base wine is fermented with just the natural ambient yeasts, it’s hard to imagine a more natural sparkling wine than this.

Domaine Raab Ramsay is not certified organic but operates according to organic principles. Mr Raab’s viticultural philosophy is to let nature do its work and only intervene if necessary and, for many years, he was Deputy Chairman for Chile’s former organic trade association, Agrupación de Agricultura Orgánica de Chile A.G.

He grows Chardonnay and Pinot Noir grapes. He also has some plots of Gewürztraminer, but the vines are suffering from the recent years of water scarcity and he has all but written them off. Water is a serious problem and he has an intricate system of water tanks and hoses to feed the drip irrigation system. Despite the increased rainfall in Chile this winter, when I visited in early November, he was shaking his head and hoping for more rain. This valley doesn’t have a river or irrigation canal and so the rainwater stored in the tanks over the winter has to get him through the growing season.

After water, his biggest issue is rabbits: “I think they must use the trunks to sharpen their teeth or something,” he says, “as they do great damage.” To counteract them, he cuts the tops and bottoms off plastic bottles and uses them to protect the trunks of the vines. A fantastic initiative in terms of recycling but it must be tediously hard work to implement.

Mr Raab also buys in País grapes and says he was making a sparkling wine from País long before Miguel Torres came up with their prize-winning Estelado brand. He also buys in organic apples from a local producer to make cider, following the same technique as for his sparkling wine. One of his latest ideas is to try a pear and apple cider, so he recently planted a plot with 400 pear trees.

“Wine isn’t really a profitable business,” Daniel Raab says, “not unless your brand is really well-known. I keep the vines mostly because I want to maintain the native forest on the land.”

The vineyards are situated in an oasis of green, surrounded by native trees, such as lingue (Persea lingue), peumo (Cryptocarya alba) and quillay (Quillaja saponaria). The late afternoon air was filled with birdsong and the hum of bees clustered around the peumo blossom. We saw a group of enormous Chilean pigeons (Paloma araucana) in a tree and three types of native alstroemeria.

Over the years, Daniel Raab has tried several different business ventures to offset the not-so-profitable wine business he clearly loves. He farmed hens and then became a pioneer in turkey production in Chile, building up a highly successful business. Then, during Chile’s economic crisis the early 1980s, along with many other businesses in Chile, the turkey business went to the wall. His latest initiative is to rent space in his cellar and offer ancillary services for local wineries looking to add sparkling wine into their portfolio. He has recently invested a significant sum in extending his cellar and buying new equipment for this, his latest business venture and he already has a few takers. Something tells me his investment will pay off.

I asked Mr Raab to tell me about his three favourite wines:

An interesting mix of styles and grapes.

An intriguing sparkling wine with a complex nose, lovely in-mouth texture and just a hint of bitterness in the finish.  Quite delightful.