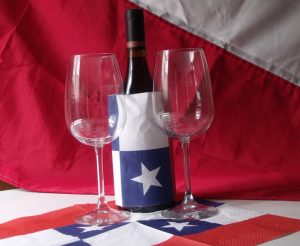 Once upon a time, France was the undisputed king of the wine world and vast swathes of the country were planted with many different varieties of vines, including Cabernet Sauvignon, Cabernet Franc, Merlot, Carménère, to name but a few.

Then, in 1863, vines began to die, but nobody knew why. First one vineyard, then another and soon vast areas of vines began to be wiped out by an invisible disease.  By the time the small, yellow, root-eating Phylloxera aphid had been identified and a solution found, French wine production had been devastated and Carménère wiped out.

Time went by and the French wine industry recovered, its vast acres now planted with the same noble varieties grafted on to phylloxera-resistant American rootstocks, Carménère being a notable exception.

The twist in the story of Carménère came over a century later on the other side of the world, when some Chilean vines thought to be Merlot were actually identified as this long-lost variety.

Many regard Carménère as Chile’s flagship variety: certainly Chile leads the way in terms of number of Carménère vines planted. This deeply coloured grape needs a long growing season to reach its full potential and thrives in many of Chile’s warmer wine regions, such as Maipo, Rapel, Colchagua, Curicó and Maule.

Ripe Carménère contributes spices, such as black pepper, red and black fruit, herbal and smoky qualities to a wine. It tends to be an accessible and easy to drink smooth red wine with well-rounded tannins.

Carménère pairs well with smoked, grilled or roasted meats, chicken, pork, lamb, beef and veal and holds its own with spicy food, like Indian and Mexican food.

So what’s your favourite Carménère?